Not a lot of things scare me that much anymore, but one thing that still has the power to send shivers down my spine is an evil clown.  I have sold several disturbing clown dolls in the past and couldn't wait to take them down to the booth to get them out of my house : - )

There is even a word for the fear of clowns, Coulrophobia.  And fueling the fire is that creepy urban legend about the clown and the babysitter ...

A teen female was babysitting for a wealthy family with a very large house, location - Newport Beach, California.  The parents planned on dinner out and a late movie. Wanting to ease the babysitter's concerns about being in such a large house, the father directs that the babysitter use a certain TV room after putting the kids to bed, so she can hear the kids easily should they awaken before the parents' return.

After the parents leave, the babysitter visits with the children, and they all share a nice supper that was prepared ahead of time by the kids' mother. Afterward, the babysitter spends time with the kids doing various activities before their bedtime. Nothing is amiss and all are having a pretty good time and enjoying each other.

After the babysitter puts the kids to bed, she goes downstairs to the room mentioned by the father of the household. She understands that this is the best room to be in so that she can hear the children should they stir in their sleep and need her to come and comfort them, but she is bothered by the clown statue in the corner of the room. To her, it is very unnerving!

She tries to ignore the clown statue and watches a little television, but finally, her nerves get the better of her and she dials the father's cell number. She knows she shouldn't disturb the couple she is babysitting for, but under the circumstance, she felt it best to phone and ask permission to go against the prior directions to stay in the father's room of choice. Perhaps he would be able to suggest a similarly convenient place in the home for listening for noise from the children. Of course, she also wouldn't want to get in trouble for directly disobeying, either.

When the father answers his cell phone, the babysitter asks, "Would it be alright with you if I find a different place in the house to sit - or if I go read quietly with the little lamp in one of the kids' rooms while I wait for you to get home?"

When the father asks if it might not be better for her to just read from the TV room, she admits, "I know this sounds very silly, but I'd rather read upstairs and don't mind not watching TV until you get home because this big clown statue in the tv room is really creepy!"

Immediately, the father says, "Go upstairs, get the kids - quickly - " and he outlines a quick route through the large house to the back door. "Go directly to the neighbor's house - phone me once you're there - go do this now!"

"We do not own any kind of clown statue!" the father replied. "I have already phoned the police and they are on their way over to the house...you stay put with the kids - we are on our way to meet you at the neighbors."

And there was even a movie made with a bit of that killer clown urban legend in it, "Amusement."


You know that all this talk about evil clowns is leading to something!

Each clown sign comes in two pieces and with those two pieces put together the clown face measures a whopping eight feet across and eight feet tall!

They would make the perfect art statement for a wall in your house.  Or maybe two walls, because each one is so big!

Hand-painted on plywood, they have aged quite nicely out in the elements and even have a bit of green moss on their edges.

These evil clown faces are extremely rare - where would you ever find another pair?

Available at Pandora's Parlor here.
Posted by Diane Irvine Armitage at 9:27 AM 2 comments:

Spooky!  I love vintage taxidermy forms, they have an other-worldy look to them.

I have three super cool vintage taxidermy bobcat forms that I just added to my website.

Vintage 1990s, according to markings on the sitting bobcat, but they have a much older, aged-looking appearance.

They look amazing in a group - a strange pack of beasts!

With a few breaks here and there and a few missing bits, they have the perfect worn patina.

You can find them here at Pandora's Parlor.
Posted by Diane Irvine Armitage at 7:59 AM No comments: 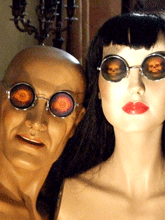