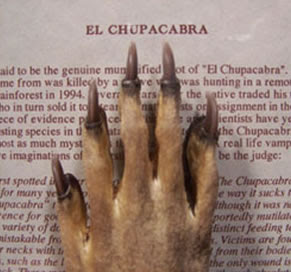 The story of its origin is shrouded in almost as much mystery as the creature itself. A real-life vampire, or a figment of the overactive imaginations of superstitious people? You be the judge:

This artifact is said to be the genuine mummified foot of "El Chupacabra." The unidentified animal that it came from was killed by a native who was hunting in a remote region of Puerto Rico's Yunque rainforest in 1994. Several years later the native traded his trophy foot to a local farmer, who in turn sold it to a team of naturalists on assignment in the area. This is the only tangible piece of evidence produced to this date and scientists have yet to match the DNA to any existing species in their databank.
Purportedly first spotted in Puerto Rico in the mid 1990’s, The Chupacabra has been leaving fear in its wake for many years now. Named in Spanish for the way it sucks the blood from its victims, “El Chupacabra” translates to "the goat sucker." Although it was named for its apparent preference for goat-blood, the Chupacabra has reportedly mutilated and fed on the blood of a wide variety of domestic animals. Because of its distinct feeding technique, Chuppa attacks are unmistakable from attacks by other wild animals. Victims are found with puncture wounds on their necks with their blood completely siphoned from their bodies. Often the victim's organs, such as the liver, are missing even though the only wound is a small hole in the animal's neck. These methodical attacks are executed with such absolute efficiency that often there is not even of drop of blood spilled on the ground around the victim. There have also been strange reports of laser-like cuts on the victims. Although some people claim they have seen the footprints of the elusive Chuppa, in many of the attacks, there are no tracks around the victim. As of yet, there are no documented assaults on humans, but many feel a human fatality is merely a matter of time...
Theories of its origin are greatly varied. Taxonomists postulate that it may be a new species related to panthers. Cryptozoologists say it’s a prehistoric reptile. Other eccentrics insist it’s an extraterrestrial. A related theory suggests that an alien spacecraft containing Chupacabras ( kept as pets, or science specimens ) crashed, thus accidentally releasing them. Originally thought to only be menacing Puerto Rico and South America, the Chupacabra has since been spotted in many locations around the globe, including the United States. Proponents of the crashed spcaecraft theory also suggest that an unstable portal from another dimension is temporarily allowing them to materialize in random locations throughout the world. Regardless of their origin, one thing is for certain, they are a formative predator, hunting down their prey and killing with virulent cunning. In either case, supernatural or of a cryptozoological nature, El Chupacabra remains a mystery for the time being. Whichever theory you believe, none of the theorists have yet to provide definitive proof that the Chupacabra actually exists, but the sightings and mutilations prove something's out there. Whether a cryptoid or space alien, its actual identity has been left to speculation."– Dr. Rod J. Schvelding ©2008 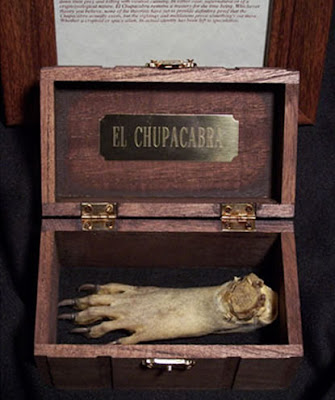 I recently added this amazing specimen to my weird artifacts collection - the foot of a Chupacabra! 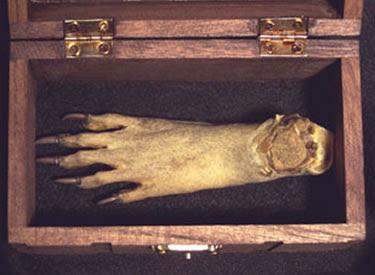 Posted by Diane Irvine Armitage at 7:03 AM

Hi Diane,
This is an awesome specimen!
Crystal

out of all the mythical, blood sucking creatures out there, the Chupacabra is almost certainly the sneakiest

Sorry to tell you this, but that just the back foot of a raccoon. I hope you spent to much money on it.

Sorry to tell you this, but that just the back foot of a raccoon. I hope didn't you spent to much money on it.

haha the idiot above sais its a racoon foot, what a sperm guzzling idiot...